Where do I get my inspiration for my stories from? It’s a question I’ve been asked many times but one I’ve never really found a satisfactory answer to and I’m not sure any writer could. What we’re all on the constant lookout for is the kind of storyline that will keep us awake at night until the final chapter is written and in turn will keep the reader enthralled until the very last page, but finding that initial idea or premise is more like a stumble in the dark rather than a carefully laid out route map. 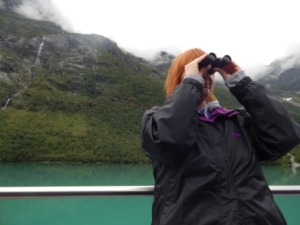 I’ve recently returned from a lovely cruise along the Norwegian Fjords and the scenery was breath-taking and if I had my way, I would hire a cabin there with a picture window to soak up the view as I spent my days writing, and writing and writing. But while the stunning surroundings could inspire me to sit and write, I don’t think the craggy mountains and glassy lakes would ever help me catch upon the initial premise for that truly amazing story that I want to write. I would need to have my ideas at the ready before I closed the cabin door.

Thinking back to the novels I’ve written so far, those embryonic ideas that would lead to fully developed stories came out of nowhere; an advert on the side of a bus; a news report; jogging past a park bench; or reflecting on my own life and past experiences. The only thing they had in common was that they invariably started with that single thought, followed by enough questions that allowed my imagination to catch the spark of the idea and let it burn. Questions that usually began with ‘What if…’

So if I’m honest, if there was inspiration to be drawn from my holiday it’s not going to be the scenery. I’m more likely to get ideas for new stories from the people I’ve met and the conversations I’ve had – or just as likely, the people I’ve observed and the conversations I’ve overheard. Those potential stories are stored in my subconscious, waiting for that flash of inspiration that will turn them into stories that my fingers are itching to write. So now I simply have to wait for inspiration to strike…