This week sees the publication of my second novella, ‘If I Should Go,’ which will be quickly followed by my next novel, ‘Where I Found You,’ out on 5th June 2014. There are some obvious differences between the two; the covers for one and the small detail of the novella being a mere 27k words compared to a hefty 111k in the novel. But there is for me a far more notable difference, namely, If I Should Go will only published as an ebook whereas Where I Found You will have both a physical and digital presence. 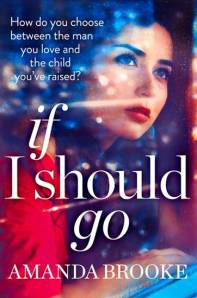 And as the author, I have a very different emotional connection to each of them. The writing process may be very similar; write, rewrite, edit (repeat as necessary) but once I had completed the novella, I didn’t get that sense of crossing a finish line, not even when the cover design was finalised. There was no specific moment where I could sit back, relax and congratulate myself for all the hard work I’d put into its creation and in spite of the fact that If I Should Go is a story I’ve enjoyed writing and can’t wait to share, there’s still a disconnect with my e-book. It’s a little like seeing the baby scan and not being able to hold the baby.

Where I Found You was another matter entirely. The initial stages of writing were the same, albeit much longer and at times more agonising but unlike the novella it would take a physical form as I discovered last week when a padded envelope dropped on my doormat. I ripped it open excitedly to touch my beloved novel for the very first time. It was real, it was tangible and it was so much worth the effort. What’s more, it’s there now sitting pretty on my bookshelf where I can admire it from afar or pick it up and yes, I will admit to this, smell it.

I am of course talking from an emotional rather than commercial point of view. I love the fact that my books are available digitally for as long as people want to read them but I would hate to see a day where the need for paper copies is completely dispensed with and thankfully there’s still a firm body of support for traditional printing to protect us from that possibility for some time yet…but maybe not forever.

Digital versus paper is a subject that divides friends, families and generations and the subject cropped up at a book club I attended at Mersey Travel in Liverpool last week. There were strong advocates who extolled the virtues of Kindles and the like. They’re easily transportable and even more so now that many of us use Smartphones for our literary fixes.  They’re great for downloading samples or taking on holiday, you can adjust the font so you don’t have to reach for your reading glasses and for the avid reader, you don’t have to worry about shelf space.

The traditional booklover’s response was at times far more emotive but there were practical considerations too. A traditional book doesn’t lose battery power and you can flick to a favourite passage on the page far easier than you can on a screen. The cover design lodges in your memory when it sits there on your bedside table and the book becomes an intimate friend with whom you can while away the hours.

It was clear from the discussion that a reader’s relationship with a paper novel was akin to a love affair as opposed to a more casual, functional relationship with an ebook. At least we were all agreed on one thing; books in any form are a great way to escape into a world made from equal measures of the author’s and the reader’s imaginations.

2 thoughts on “Digital vs Paper – An Author’s Perspective”