When it comes to writing fiction, there’s only so much you can draw from personal experience and knowledge before you have to start knuckling down to research. It’s a necessary evil that sometimes slows down the writing process but then there are certain subject matters where you can only count your blessings that you don’t have firsthand experience. Another Way to Fall is about a young woman with a brain tumour and as well appreciating my own good health as I built Emma’s world around her, I also felt a huge weight of responsibility. I had to do justice to my heroine and more importantly the real life sufferers of this insipid disease. I had to put the research hours.

Now I’m the first to admit that with my fledgling career as a writer and a full time job, finding enough hours in the day can be a struggle so it’s a godsend when I can enlist the help of others and with my second book I was lucky enough to find a wealth of information and advice from someone who surely had better things to do with her time than answer my endless questions. Natalya Jagger set up BT Buddies (www.btbuddies.org.uk) after her friend’s daughter was diagnosed and later died from a brain tumour. She is undoubtedly an amazing woman with a generous spirit which she extended to me. We certainly agree on one thing, the story of someone battling a brain tumour should respect the harsh realities and not trivialise or twist facts. That being said, I have to accept that my account will be flawed. I don’t know if writers are meant to admit to that but the truth is, even with the best research, I still can’t know what it’s really like for sufferers, I can only imagine and I hope I’ve achieved what I set out to do, to create a story that will be inspiring and not depressing, to reflect the inner strength and bravery that can be found in real life and to give some insight into a family dealing with a cancer diagnosis, something I do have experience of.  More than anything I want readers to admire my Emma rather than pity her and to love her as much as I do.

Continuing on the subject of research, I should confess that it’s not all as onerous as it sounds and sometimes it can broaden horizons. In Another Way to Fall, Emma gets to create an amazing life for herself and amongst other things, explore the world. In the first draft this included going off to Iceland and it was only when I started researching the country that it became one of my own dream destinations. Sadly, Iceland didn’t make it to the final cut although to counter this I did make reference to New York which was where I took my daughter Jess for a celebratory holiday after getting the first book deal. But where fiction failed, reality succeeded and at the time of writing this blog, I’m on the flight home after an absolutely amazing week in Reykjavik. I didn’t get to see the northern lights but maybe next time…and I really do want to go back…the mountains, the volcanoes, the geysers, the lava fields, the thermal pools, the waterfalls, the glaciers, the blue lagoon…I could go on. It was all breathtaking and I wasn’t deterred in the least by the driving rain, low cloud or lack of daylight – it’s only given me an excuse to go back again during summertime.

I’m sorely tempted to bore everyone with tonnes of photos but I hope these two reflect the two extremes of my experiences on holiday. 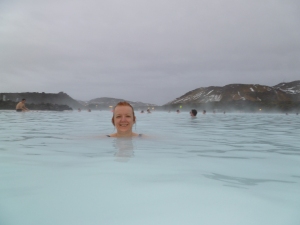 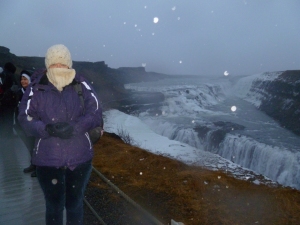 I know I’m in danger of sounding like I’m working for the Icelandic tourist board but it really is an incredible country and even though there’s a lot to be said for blazing sunshine and sandy beaches, this is one holiday I won’t forget in a hurry and one that might just make it into another of my stories one day.